The TSS Earnslaw is a 1912 vintage twin screw steamer plying the waters of Lake Wakatipu New Zealand. It is one of the oldest tourist attractions in Central Otago, and the only remaining passenger-carrying coal-fired steamship in the southern hemisphere.

What is a twin screw steamer, you ask?  It is a is a steam-powered vessel propelled by two screws, one on either side of the plane of the keel. That should clear it up for you.  If not, how about this: 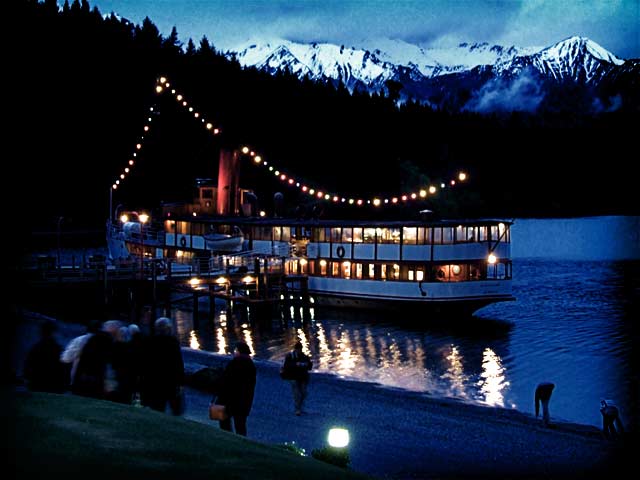 Quite a bit different from the jet boat of this morning.  The cruise was lovely. We got to have pictures taken on the bridge. It took everything I had not to refer to the shorts-wearing captain as “Capt. Stubbing.” We got to see the engine room and watch them shovel coal into the engines. Strange that something so mundane was so interesting.  It may be the only time the girls ever see something powered like that.

We disembarked at Walter Peak High Country Farm for dinner. The Colonel’s Homestead is beautiful and the food was good. By this time we have eaten New Zealand Buffets a number of times and while the food is always good it is beginning to become a bit run of the mill. And I am still getting used to the idea that cheese is not an appetizer but a dessert.

After dinner we went to the shearing shed and watched the farm dogs rounding up sheep from the hill paddocks, and the farmer shear a sheep. The dogs are the most amazing creatures. And the sheep, well, they are much like certain girls I knew in high school; cute, compliant and down right stupid. Here is a short clip of the show we saw, posted by someone else as we left filming to the girls.

On the trip back, at the pleading of the girls, we sat in on the traditional sing-along with the ship’s pianist.  Granted we were the only people there under 60, but the girls had a great time singing the hearts out to songs they have never heard before.  Finally, a walk back to the hotel and sleep much needed sleep.